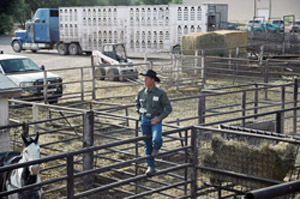 In the Washington, DC world of public affairs, spectators will constantly see campaigns built around the idea of creating media hysteria and “spin.” Some of the worst we’ve come across involve undercover animal rights operatives who apply for a job at a farm—often omitting their employment with their true masters from their resumes, or just plain lying about it. Then they secretly record hours and hours of footage, which is later spliced into a few moments of bad press.

Here’s a suggestion for anyone faced with this sort of mean-spirited tactic. Why not refuse to comment, or even acknowledge the legitimacy of a selectively assembled video, unless the animal rights group behind it agrees to share every bit of video shot on your property? One New Mexico case involving the Humane Society of the United States is a perfect example of why you might need to stick to your guns.

On June 25, 2008, HSUS issued a press release and released video footage supposedly showing the abuse of livestock at the Portales Livestock Auction in New Mexico. The footage was shot by an undercover HSUS activist. HSUS even claimed that workers abused “downer” cows because they couldn’t walk on their own. Filled with righteous indignation, HSUS said that it had already taken its case to the proper authorities:

In advance of today's public release, The HSUS also provided information on the investigation to the New Mexico Livestock Board and the USDA, as well as to national industry leaders.

Is all of this on the level? As usual, the devil’s in the details. Let’s take a closer look.

The New Mexico Livestock Board (NMLB) acts as a “law enforcement agency” that oversees the state’s livestock producers and traders. NMLB is older than the state of New Mexico itself.

Weeks after HSUS’s press release—after the media had managed to get the public all riled up—NMLB released an official report describing what happened in this case, and analyzing HSUS’s claims.

The NMLB’s report says that five days before HSUS put out its press release, a meeting was held at the NMLB’s main office about alleged abuse of downer cows at the livestock auction. At the meeting was Michael Markarian (then HSUS’s vice president) along with NMLB’s director. Here’s what the report states (emphasis added):

At that meeting, Mr. Markarian indicated that HSUS undercover investigators had identified and filmed a number of animal abuse violations at PLA [Portales Livestock Auction]. Lengthy discussion followed regarding downed cattle, the appropriateness of euthanasia, and HSUS's recommended mitigation. Mr. Markarian was unclear as to any recommendation on how to reach the decision point for determining when euthanasia would be appropriate, other than to immediately shoot them using a hollow point bullet. […]

[NMLB] Director Culbertson asked Mr. Markarian to immediately provide their video in order for the agency to commence an investigation. He agreed to provide it right away. NMLB did not receive the subject video immediately as promised.

A letter from Mr. Markarian, dated July 24, 2008, was received by the agency citing a number of accusations regarding treatment of animals at PLA. On June 25, 2008, HSUS distributed video footage along with press releases and public statements directed toward the incidents in question. That same week, HSUS met with USDA Secretary Shafer and provided a video to him, presumed to be the same as that received by the NMLB. By the time the NMLB received the video it was already in the hands of the news media, and various press statements had been issued by HSUS. As a result, the investigation was hampered and delayed by at least a number of days while perceptions and reactions were being formed among the public, as well as the USDA, the American Veterinary Medical Association, members of congress, and elsewhere without the benefit of objective assessment.

So, Markarian promises on June 20 to immediately share its videos with authorities. Five weeks later, the NMLB simply gets a letter in the mail. By that point, HSUS had already generated a public controversy—and probably a heap of donations.

The actual follow-up investigation by NMLB concluded that HSUS’s claims were not justifiable based on the video evidence. A team examined the nine cases of purported abuse in the HSUS video and came to the following conclusions:

That’s not all. The NMLB report notes that on at least one occasion, HSUS’s investigator had the opportunity to help relieve the suffering of an animal but “apparently chose not to assist, in order to take compelling but nevertheless misleading video footage.”

In the end, the report concluded, “perceptions created by the HSUS media releases and press conferences of malice, extreme cruelty, or illegal marketing of downer cows are not found to match the reality of the subject video.”

This report wasn’t written by a cabal of evil New Mexico ranchers, or by McDonald’s shareholders. It’s the official report of a state government agency. The unfortunate problem, of course, is that the NMLB didn’t finish its report until August 8, a full six weeks after HSUS had poisoned the well with its agenda-driven spin on the situation. When Mark Twain observed that a lie can get halfway around the world before the truth has a chance to put its boots on, he was ahead of his time.

So HSUS has a huge incentive to go full steam ahead with media briefings and cherry-picked movie segments. When you’re looking for emotional reactions, there’s no point in subjecting your claims to actual experts whose analysis might be based on (gasp!) evidence and logic.

We don’t know if you’re coming away from this story thinking what we're thinking, but this kind of willful duplicity is bound to make New Mexicans (if not all Americans) less likely to believe their own eyes the next time HSUS fires up its camcorders.