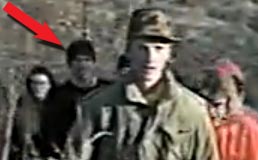 If I'm not mistaken, that's a young Wayne Pacelle jogging with a group of hunt saboteurs.

This video was produced by the Wildlife Legislative Fund of America (later renamed the U.S. Sportsmen's Alliance) in the late 1980s, which would have made Pacelle a recent college graduate at the time.

Look for Pacelle, now CEO of the Humane Society of the United States, from [0:20] to [0:24] in this CBS News footage, bopping along in the black sweater.

He shows up again in a different clip at [1:11], hassling a Fairfax County, Virginia police officer.

Long before Pacelle became a superb DC lobbyist on behalf the animals and one of our movement's most effective representatives in the media, he earned his radical animal rights activist credentials as a hunt saboteur. We can be sure he is not a fan of any hunting …

It seems to have begun when Pacelle was still a college student at Yale. (We wonder how many credits he got for that.)

The Associated Press reported on November 28, 1986:

Four people trying to stop a deer hunt were arrested by state conservation officers and charged with harassing hunters in the Yale-Myers forest in northeastern Connecticut, officials said.

The four arrested Thursday were among a group of 40 to 50 protesters who have been trying to stop Yale University's annual deer hunt, now in its third year … Yale officials say the hunt is necessary to control the deer population and prevent starvation of the herd in the school-owned forest that sprawls over 7,800 acres in Ashford, Eastford and Union …

Wayne Pacelle, 21, of New Haven, a Yale student and animal rights activist, was one of those charged with the misdemeanor. He said the arrests came after two hunters complained wo conservation officers that protesters were interfering with their hunting.

"I asked the hunters, 'How can you eat Thanksgiving dinner topday [sic] with blood on your hands," Pacelle said Thursday after the arrest.

He said he and some other protesters followed one of the hunters for an hour through the woods, commenting on their view of the ethics of the hunt.

As the hunter and his companion approached their truck, protesters began a "street theatre" in which some costumed as deer stalked others dressed as hunters, "helping conserve hunters by thinning them out."

Charming. We'd say Pacelle was lucky to leave in handcuffs instead of on a stretcher.

It must be added that Connecticut's "hunter harassment" law was later found to be unconstitutional. Apparently, these knuckleheads had a right to step in the path of a high-powered rifle round. So be it.

But from where we sit, the main difference between 1986 Pacelle and 2010 Pacelle is money and a spray-on tan. We don't believe he's changed his views one bit. Do you?