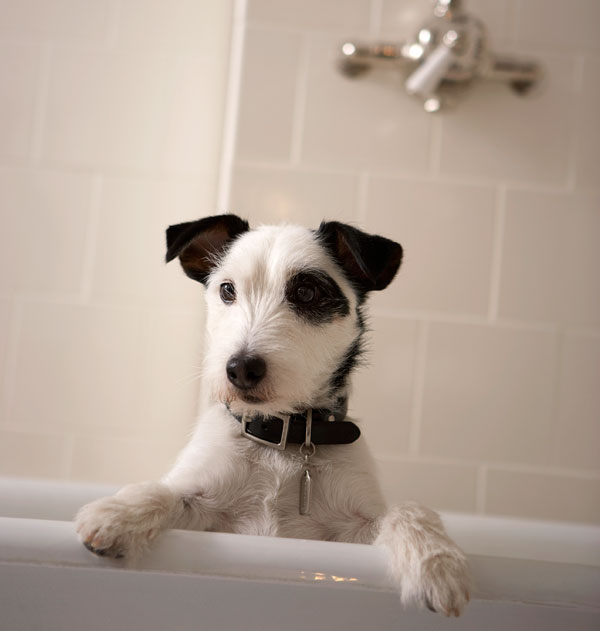 The Humane Society of the United States hauls in $100 million per year, and has another $191 million in assets. So you might think this national “humane society” would be able to help millions of animals. After all, HSUS shares less than 1 percent of its budget with hands-on pet shelters, so the other 99 percent must be spent directly on caring for Garfield and Odie, right?

Not so fast: It’s true that HSUS runs a few animal sanctuaries—generally for horses and wildlife, though, not pets. But HSUS helpfully, at least in two recent annual reports, put exact numbers on the animals it claims to be caring for.

Could HSUS be doing more? We’ll let you decide.

According to HSUS’s 2007 annual report (see below), the organization provided some form of care to just over 24,000 animals that year.

In the following year’s annual report, however, HSUS bumped its 2008 “Animals Cared For” number up to about 70,000 animals. That figure includes 33,000 pets—nearly half of HSUS’s claimed amount—that were sterilized as part of HSUS’s “Spay Day” promotion. 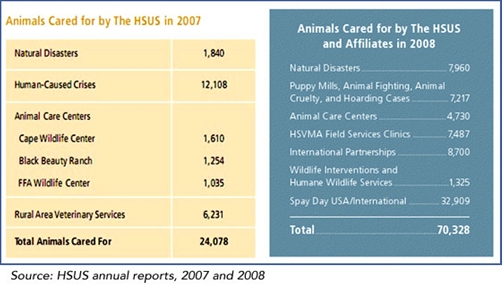 This is odd because HSUS has run “Spay Day” since it merged operations with the Doris Day Animal League in 2006. (DDAL founded the event in 1995.) Why didn’t HSUS also count Spay Day pets in 2007?

At the very least, we can conclude that an enormous percentage of the animals “cared for” by HSUS aren’t actually long-term cases. Spaying and neutering are brief surgeries that have little to do with animal rehabilitation or adoption.

Not that HSUS is actually doing the surgeries. In its 2009 annual report, HSUS claimed credit for “40,000+ spay/neuter surgeries performed by nearly 400 organizers in 24 countries during HSUS and HSI Spay Day events.”

In other words, HSUS is claiming it “cared for” animals that it never saw. It may have raised pass-through funds to sterilize them, but that’s a horse of a different color. Just ask HSUS's South Dakota state director, Darci Adams:

We have no affiliation with local shelters … our efforts focus on policy.

And although HSUS does care for some animals on a longer-term basis (HSUS’s wildlife centers come to mind), the animals rescued by HSUS in high-profile “raids” (like this one from earlier in the week) are generally sent to local shelters for fostering and adoption. HSUS is just a temporary middle-man. And as the indispensible YesBiscuit! blog has showed us, HSUS’s “rescues” are sometimes sadly temporary, resulting in certain death for many of the animals.

UPDATE: One irony in all of this is that some individual farmers provide direct care to far more animals in a given week than HSUS can claim to in a whole year. Yet it's these same farmers that HSUS routinely attacks for the supposed sins of running large businesses and producing an income.