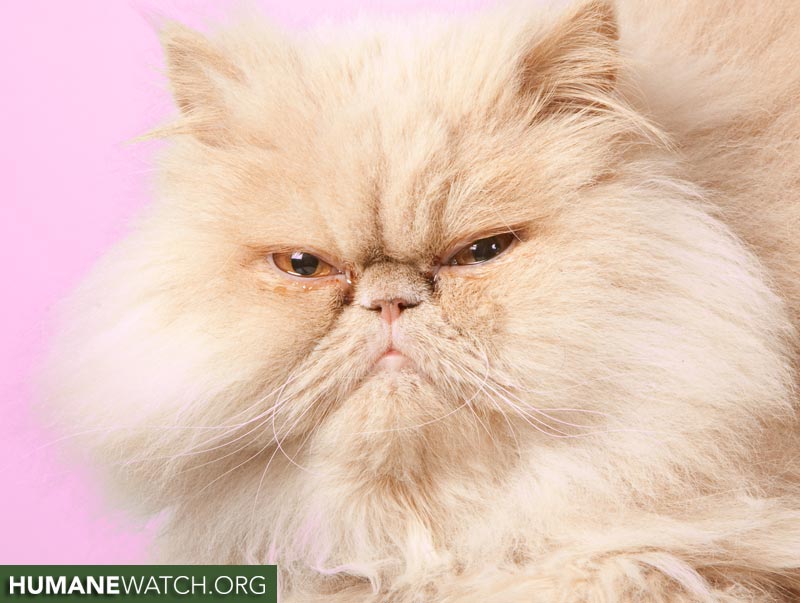 Editor’s Note: We rescued Snark from a pet shelter in the rural prairie farmland of downtown Washington, DC. At least we think that’s where it was. The truth is that we’re all allergic to cats here, so our eyes were closed half the time from sneezing so much.

Snark is a little rough around the edges, but he tells it like it is. He comes from a long line of chew-toy and catnip magnates. His great-great-great grandfather brought the first scratching post over from Thailand. And his second cousin (once removed) isolated the gene that makes cats land on their feet.

We’ve invited Snark to share his feelings—just feelings, not pesky analysis—about the Humane Society of the United States. This is his first column. It does not necessarily reflect the views of HumaneWatch. Or something.

It looks like HumaneWatch touched a nerve with HSUS head diva Humane Wayne this week. The blog “outed” HSUS’s 2009 tax return on Tuesday and wrote about it on Wednesday. Pouty Pacelle posted another copy of the tax filing yesterday, and pretended like it was his idea. And then here comes the spin:

Some weeks ago The HSUS submitted its Form 990, a financial filing required by the Internal Revenue Service to ensure transparency, good governance, and accountability. Today, we’re posting it on our website, as we do every year after it is submitted to the federal government …

Our 2009 Form 990 is longer than ever, not least because there’s so much activity at The HSUS. We have the top professionals in the field of animal protection in our employ, and we believe that the support provided to us by donors is best used when we conduct the work ourselves. Still, we are proud to provide assistance to some other organizations in distress or to complement our work, although our purpose has never been as a pass-through granting agency.

Really, Wayne? What flavor is the kool-aid you have to drink to believe this stuff?

You forgot about the 60-40 split HSUS used to have with pet shelters. Shelters got the 60, you kept the 40. (Hey—my ancestors were in those shelters. They needed the dough.)

And no one’s saying you should give all your money to shelters. Not even 60 percent. Half would be nice.  (Oh, hai? Shelterz can has ur H$U$ dollarz?)

Oh, and HSUS (excuse me—“The” HSUS) signed its tax return on September 2. That was 7 weeks ago! Why the delay? Aren’t you proud of all that “combating cruelty” you’ve been doing?

Wait a minute … I get it! Wayne-O didn’t want to have lots of people flipping through HSUS’s dismal performance report a few weeks before election day in Missouri. And Arizona. Well, good luck with that. Thousands of people have downloaded it from HumaneWatch already. Lots from Missouri. Go figure!

It’s pretty funny to watch Wayne rushing to post the tax return all of a sudden, though, and then acting all virtuous for being “transparent.” It’s even funnier in that coat and tie. I didn’t know polyester was back.

Maybe Wayne needs a little animal protein in his diet. I don’t know. Personally he can take my tuna and chicken lunches from my cold, dead paws.

Yeah, I know. I’m getting all worked up. But what do you expect from me? Wayne’s essay is long on emotion and short on statistics. He could only find one actual HSUS spending number to talk about.  (Since he does all those pretty-boy TV ads, and the glamour shots for his blog, maybe numbers aren’t really his thing.)

And another thing, Wayne: Last year you took 23 cents for every dollar HSUS took in, and blew it on more fundraising. In 2008 the number was just one percentage-point higher, and you remember what happened? Charity Navigator gave your slick factory fundraising outfit a one-star “efficiency rating,” that’s what happened.

My favorite part was when he took a few catty pot-shots at HumaneWatch—without screwing up the courage to mention it by name. Nice bank-shot, Wayne. I think your cojones are smaller than mine. (Yeah, I know, I know … you can’t choose your species.)

But I do have to give him credit for one thing. It takes a special kind of man to make his ghost-writer churn out more than 1,000 words, just to distract people from the fact that he’s running a phony “humane society.”

1,000 words? Methinks the lady doth meow too much.

Now where’s my warm milk? I need a nap. Somebody wake me the next time Wayne says something misleading or deceptive. On second thought, don’t. I want to catch more than 10 minutes’ worth of Z’s.