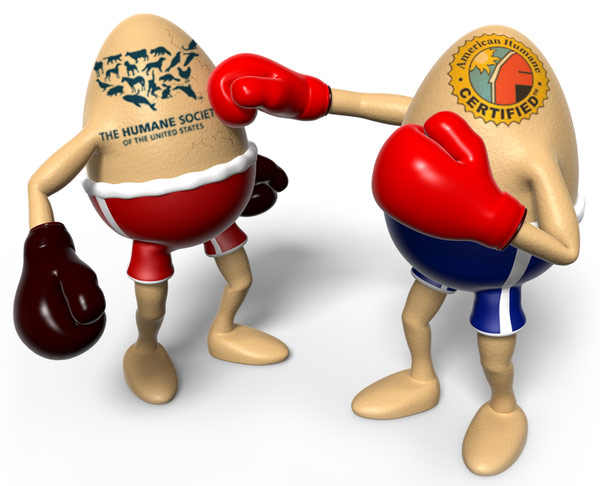 Newton’s Third Law of Motion states that for every action, there is an equal and opposite reaction. The Humane Society of the United States just might be learning this one the hard way.

HSUS, which isn’t affiliated with your local pet shelter, spent more than $17 million of its donors’ money on lobbying efforts between 2005 and 2009 while giving far less than that to hands-on pet shelters.

Currently on HSUS’s lobbying agenda are state ballot initiatives in Washington and Oregon to force egg farmers (and consumers) to go “cage-free.” These are sequels to the group’s 2008 “Proposition 2” campaign in California.

Today HSUS lost the support of The Oregonian, the largest newspaper in the Beaver State. This marks the second major Oregon setback for HSUS in a few months’ time.

HSUS’s political credibility is going to the dogs.

Here’s a rundown of events in Oregon.

This year Oregon Senate President Peter Courtney (D) introduced an HSUS-backed bill requiring egg farmers to go “cage-free” by 2019. But once he had a better-founded scientific understanding of the issue, he amended his own bill to require egg farms to adopt American Humane Association-approved “enriched” cages instead (by 2026). These enriched cages are bigger than conventional cages and allow hens to engage in natural behaviors.

On April 6, The Oregonian editorialized against the amended legislation, taking HSUS’s side. “Passing this amended bill,” the paper opined, “would be worse than doing nothing at all.”

In a new editorial, the paper says a ballot initiative would be a “messy scramble” and a “crude tool.” More pointedly, the editorial argues that “settling the dimensions of hen cages down to the square inch clearly is a matter for legislators, not voters.” (We would add that it’s also not a matter for animal rights activists who want to “get rid of” egg farming.)

This morning’s Oregonian is causing shock waves in the animal rights movement from Portland to Washington, DC. It’s not often that a newspaper reverses itself in such a short span of time, but there was good reason.

Reality may be catching up with HSUS. In Missouri the group successfully squeezed through the anti-“puppy mill” Proposition B last fall with a very narrow margin of victory. But the state’s lawmakers got together this spring to pass a bipartisan reform bill, removing some of the more egregious parts of Prop B while increasing funding for kennel inspections.

Animal welfare does not come down to a single measure, and there are legitimate welfare arguments against HSUS’s attempts to force “cage-free” on everybody. We’ve noted, for instance, the prevailing scientific consensus that hens housed in enriched cages have a lower rate of death and disease than “cage-free” hens. So it’s heartening to see open-minded journalists looking at more than just one-sided propaganda.

One last detail from today’s Oregonian editorial is worth mentioning. Apparently HSUS CEO Wayne Pacelle told a Salem lobbyist that he “would be satisfied” with something like the enriched-cage bill, provided that it were phased in over 10 years instead of 15 (which the bill currently requires).

Really? HSUS would be satisfied with a bill that phases in enriched cages? (Cages of any kind?) That would be news to us.

HSUS has always been “cage-free or bust.” This startling backtracking appears indicative of Pacelle recognizing that he’s about to find himself without a chair when the music stops.

Outmaneuvered in Missouri and outfoxed in Oregon. It’s certainly about time.