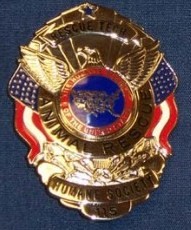 There’s an important interview that’s been making its way around the blogosphere. Given our recent coverage of HSUS raids in Hawaii and South Dakota that have raised serious questions about HSUS’s ethics, we think it’s time to talk about it.

This is a story that involves illegal searches, para-professional animal rescuers with no credentials, and even HSUS employees impersonating police officers. It’s ugly stuff.

Carroll Cox is a Hawaii-based radio broadcaster. In October, after Norman Pang filed a lawsuit against HSUS following a raid by HSUS’s “emergency rescue team,” Cox invited two former HSUS rescue team members on to discuss their experiences. One is Ronnie Graves, president of the Sumter Disaster Animal Response Team in Florida. The second guest was Allan Schwartz, a horse expert.

You can listen to the full interview of Graves and Schwartz here. It’s well worth your time. But for those with time constraints (sadly, work doesn’t do itself), we’ll share the meatier parts here.

Allan Schwartz begins by noting that Hurricane Katrina was a turning point for HSUS in creating a formal disaster team. He was brought on as its second member in January 2006, later becoming a consultant. Graves, for his part, worked with (former) Director of Emergency Services Scotlund Haisley for 13 months on 8 to 10 deployments. (Graves resigned in January 2009.)

Haisley, you might remember, led the HSUS team in South Dakota that executed an illegal search warrant on a dog breeder. He’s also named in a Hawaii lawsuit stemming from another HSUS raid.

Schwartz tells Cox that before Scotlund Haisley arrived, the HSUS rescue team “basically had a quasi-uniform” meaning “BDUs [battle dress uniforms], t-shirts, and HSUS-marked t-shirts” in order to give the appearance of a well-trained team. It wasn’t until after Haisley showed up that HSUS rescue team members got actual badges to wear. These badges (pictured above) look like law-enforcement credentials, and could easily be mistaken for them. (The picture at right shows HSUS rescuers Rowdy Shaw and Scotlund Haisley wearing them.) 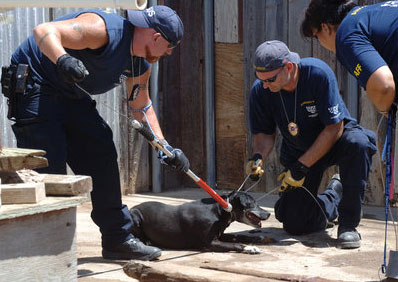 Apparently, the whole idea was to be mistaken for actual police officers. Graves had concerns about this. Here’s how he relates Wayne Pacelle’s and Haisley’s reactions to his apprehension:

When Scotlund Haisley sent me the HSUS Jacket, there was a Badge and an ID card inside the pocket. An officer of the law was in my office that morning visiting with me as a friend. He stated that if I put that badge on, there was a good chance that it would be mistaken as an [sic] law enforcement badge and I could be arrested.

I called Scotlund and relayed my concerns. His statement to me on the phone was, “I want the scum to think we’re law enforcement”. I informed him I would never wear that badge. I work with a large number of law enforcement people and have the utmost respect for them. From viewing Scotlunds [sic] behavior for a year, it is apparent that he has nothing but contempt for them.

When I had my face to face meeting with Wayne Pacelle at my hotel room in January 2008, in rural Mississippi, I brought this comment up to Wayne. His comment back to me while smiling his famous smile, was “I like the Cowboy Ways that Scotlund brings to the team”. I told him those Cowboy Ways were going to net him a huge lawsuit one day. I had already informed Mr. Haisley that I would not be signing another contract with HSUS at the end of January when mine expired. This was about the 26th of January or thereabouts.

They weren’t the only HSUS rescuers who had issues with this. Only two of the original HSUS rescue team now remain, out of 14 full-time employees. The remaining two are office personnel. All of the original field workers have resigned.

And Graves says he’s not the only one who has talked to Wayne: “Mr. Pacelle has been told many, many times and almost every member of the team that has resigned in the past said to me that they sent in a resignation letter not just to Mr. Pacelle but to … some of the board of directors and to other supervisors.”

So how should an animal rescuer behave? Schwartz details the appropriate code of behavior:

There’s certain protocol that you have to follow and the first and foremost thing is that we are not cops. We’re not district attorneys, we’re not detectives. We’re not supposed to put ourselves off as such … Any deployment that I have gone on like that, we were not even there when the initial search warrant was issued. You let the officers with the SWAT team go in and get the situation under control.

Graves also points out that his training is listed on the back of his local county’s qualification cards, so that officials can check him out when he shows up at emergency operations. On HSUS’s card, however, no training is listed. 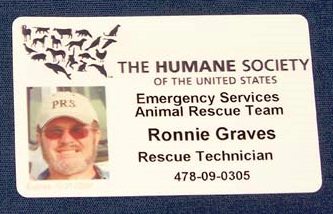 He also notes this: “At the time when I left, which was last January, and that’s all I can speak about, Mr. Haisley had openly admitted to me that at that time he had absolutely no ICS [Incident Command System] training and no DART [Disaster Animal Response Team] training….That’s a minimum amount of training required by [HSUS] to be a volunteer for them.”

In other words, Haisley didn’t have the basic training that brand new ride-alongs needed, even though he had authority over the rescue team.

But Graves relates one occasion in Texas following Hurricane Ike in September 2008, in which Haisley left a swiftwater boat team behind while he and HSUS’s film crew went ahead to an emergency site to do a rescue. (Priorities, priorities…)

Haisley was let go by HSUS in February of this year. It’s a small wonder he lasted that long.

So we have phony badges and an illegal search. Are HSUS team members the cops or the robbers? We can’t tell anymore.