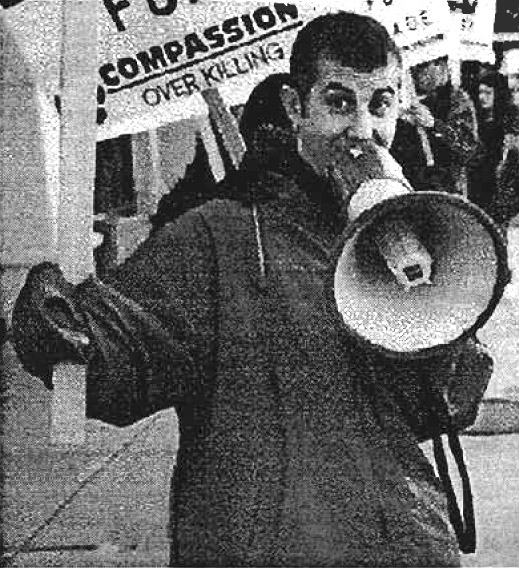 A handful of HSUS senior staffers, past and present, have roots in the radical fringes of the animal rights movement. Six years before becoming CEO, HSUS's Wayne Pacelle hired former Animal Liberation Front spokesperson John "J.P." Goodwin. Pacelle himself came from the anti-hunting Fund for Animals, and cut his activist teeth sabotaging deer hunts. Matthew Prescott, who runs HSUS’s shareholder-activism campaign, came directly from the über-crazy People for the Ethical Treatment of Animals (PETA). And HSUS recruited the leadership contingent of the Washington, DC-based group Compassion Over Killing (COK)—essentially an even more rag-tag version of PETA.

HSUS senior campaign manager Paul Shapiro founded COK in the mid-1990s when he was a prep-school student. Miyun Park, who teaches at Humane Society University and was a vice-president at HSUS until last year, also helped run COK, as did HSUS staffer Josh Balk and HSUS lawyer Carter Dillard.

COK, like PETA, has always been a vegan advocacy organization—and unabashedly so. (At least it’s open about it, unlike HSUS.) And perhaps unsurprisingly, the group openly supported violent criminals under Shapiro’s leadership.

In the mid-1990s, COK targeted a DC furrier called Miller’s Furs. (Back then, COK mainly protested fur sellers and circuses.) At one point, the group published Miller’s home address as a tool for angry activists targeting him and his family.

By early 1997, COK was actively recruiting members for a new cell of the terrorist Animal Liberation Front, just to pressure this one fur retailer.  The Winter ’97 issue of The Abolitionist, COK’s official magazine, featured an article announcing that “members [are] needed” for the “MF-ALF” (which stood for “Miller’s Furs–Animal Liberation Front”). The article included suggestions to “smash a window… throw a paint bomb… burn Miller’s Furs down.” Some of the listed “benefits” of joining included the “nervous breakdown” of the fur salon’s owner.

Yikes. Judging from the records archived by the Internet Wayback Machine, COK later scrubbed this article from the Internet. (Clicking here, you can still read the rest of the issue, but not the ALF recruiting ad.)

For background, the Animal Liberation Front and its green twin, the Earth Liberation Front, are both FBI-designated terrorist organizations. An FBI section chief testified in 2002 that the Bureau “estimates that the ALF/ELF [had] committed more than 600 criminal acts in the United States since 1996, resulting in damages in excess of 43 million dollars.” That would seem to include crimes against Miller’s Furs in Washington. (More on that below.)

In the interest of full disclosure, COK ran a (rather noncommittal) disclaimer at the end of the recruitment article stating:

This article is for entertainment purposes only. COK does not endorse (nor condemn) any illegal acts.

(Paul Shapiro comprised one-quarter of The Abolitionist’s editorial board, and his father is an attorney. So the cover-your-you-know-what strategy isn’t surprising.)

The spring/summer 1997 edition of The Abolitionist again promoted ALF vandalism, this time with a two-page photo spread glorifying criminal “direct action” against animal-rights targets. And again COK seems to have erased the Animal Liberation Front material at some later date.

Here’s the official “masthead” from that issue:

UPDATE: In a huge oversight, we forgot to note that Peter Petersan (named above) is also now an HSUS employee. He is the organization's Deputy Director of Animal Protection Litigation. Franklin Wade now helps to run a chickens-rights group called United Poultry Concerns.

COK also sold a video produced by the ALF through an ad in The Abolitionist. (See page 14.) Anyone who mailed a blank videotape and $5 would receive (from COK) a copy of “Animal Liberation: The Movie,” made by the ALF, and a film about the ALF called “Angels of Mercy?” (Today’s would-be arsonists can watch the ALF propaganda movie on YouTube for free.)

And besides, Shapiro is now firmly ensconced in the HSUS universe, where the mere mention of the Animal Liberation Front could blow a hole in HSUS’s self-described intolerance for violence.

By 2003, The Washington Post was already noting that COK’s tactical toolbox had become more smooth-edged:

It's not a message of compromise. It's something perhaps more shrewd: a message of welcome to flesh-eaters, on the theory that this will more effectively bring about the meat-free millennium. They're like missionaries for a vegan God who is not angry. She'll forgive you for sinning with that Egg McMuffin, so long as you are sincerely working toward a better breakfast.

It’s not that Shapiro doesn’t still believe "The Meat Industry Equals Systematic Murder” (a sign he once carried). And he’s clearly still pursuing the total “liberation” of animals, albeit in a more incremental fashion. His more grown-up menu of campaign tools fits the image of that $100-million-a-year group that pays his salary.

But the next time Paul Shapiro strolls into a corporate boardroom with “cage-free” or “cruelty-free” demands, it may be helpful for his audience to remember exactly who it is they’re talking to.