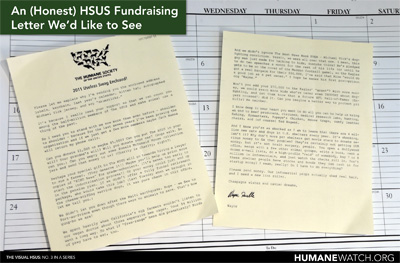 Following the Sunday Los Angeles Times editorial about our recent full-page ads, there’s been a lot of discussion about HSUS’s television and direct-mail fundraising tactics. We find them deceptive, largely because most of the animals on the TV screen and in the envelopes are cats and dogs. This leaves viewers with the impression (one held by most Americans, according to national polling) that HSUS is a pet-shelter umbrella group and gives most of its money to hands-on pet-care organizations. That impression is far from reality.

Along those lines, we’re releasing our third entry in the “Visual HSUS” series. Today’s illustration is our idea of what an unfiltered, fully honest HSUS fundraising letter could look like if HSUS president Wayne Pacelle were to shift away from utilizing misleading images of dogs and cats in fundraising efforts and instead be open about HSUS’s true agenda—including supporting Michael Vick, large pension funds, and a radical animal rights philosophy.

Click on the image below to view it. As usual, you can find a poster-sized version of today’s visual over at Zazzle. (And be sure to check out parts 1 and 2 if you haven’t already.)