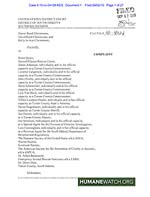 This is a copy of a federal lawsuit filed on September 2, 2010 by South Dakota dog breeder Dan Christensen. He sued numerous defendants, including the Humane Society of the United States, its CEO Wayne Pacelle, and former employee Scotlund Haisley, over events related to a 2009 raid on his property which was carried out by HSUS and a local animal rescue organization.

All of Christensen’s dogs were confiscated during the raid. A judge later ruled that the search warrant was obtained under false pretenses, and the raid itself was therefore illegal.

The lawsuit demands $5 million in compensation for the following allegations: