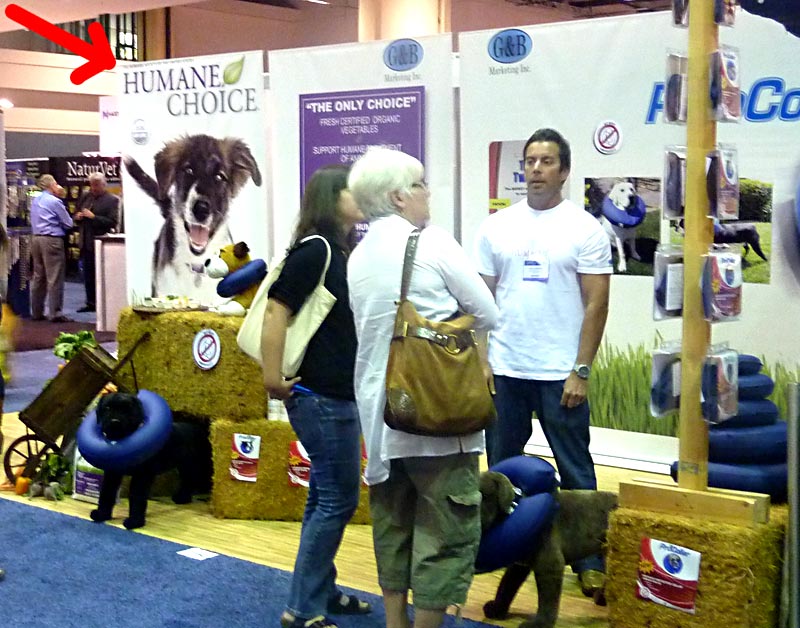 We can't figure out what would make this week's Global Pet Expo extend a welcoming embrace to a line of pet food whose profits are shared with the Humane Society of the United States. We doubt they need the exhibitor dollars that badly.

We had the same reaction a few years ago when the Conservative Political Action Conference accepted an offer from HSUS to be one of its exhibiting sponsors. (That arrangement came to a screeching halt when CPAC's organizers figured out what HSUS was all about.)

But here's the "Humane Choice" pet food booth at the trade show in Orlando, and a gazillion pet-store buyers are being asked to stock it. These are businessmen and women who stand to lose everything they have if HSUS were to get everything it wants. Pet breeders are in HSUS's line of fire. So are pet stores that dare to sell, you know … pets. And the livestock farmers whose byproducts go into pet food. And don't get us started about the lab-animal research that actually benefits pets.

But fear not—there are at least a half-dozen trade-show booths flying the HumaneWatch flag by hanging up our poster where everyone can see it. (One vendor even hung its own homespun HumaneWatch sign!)

And even more interesting than "Chad" (the helpful vegan dog food sales guy) is the back of the product slick he's handing out.

Here's what it tells us: 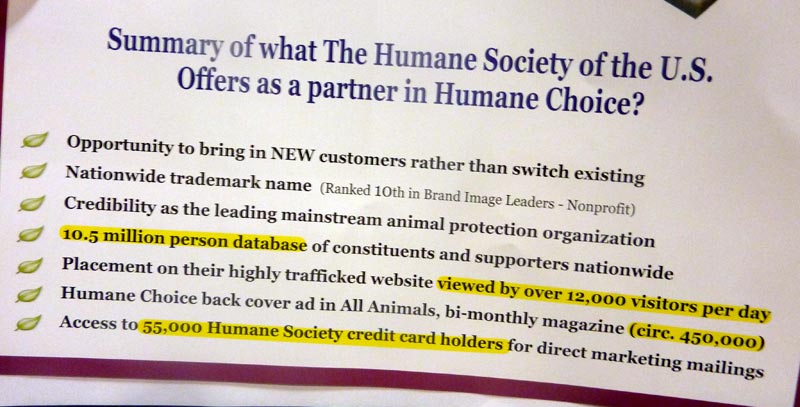 We've written before about the circulation numbers for HSUS"s membership magazine. It's a good indicator of the group's true membership numbers.

The credit-card enrollment figures are laughable. There are 576.4 million credit cards in U.S. circulation. HSUS has cornered less than one one-hundredth of one percent of the market. (Good for them.)

And 12,000 daily website visitors don't impress us. HumaneWatch has only been around for 5 weeks, and this humble blog is already averaging about half that. (Really.)

It also turns out that "Humane Choice" dog food is just the brand's first toe in the water.There's also going to be bird seed and grooming supplies (shampoos and "conditioning spritz"). But only the dog food appears to be "partnered with the HSUS." 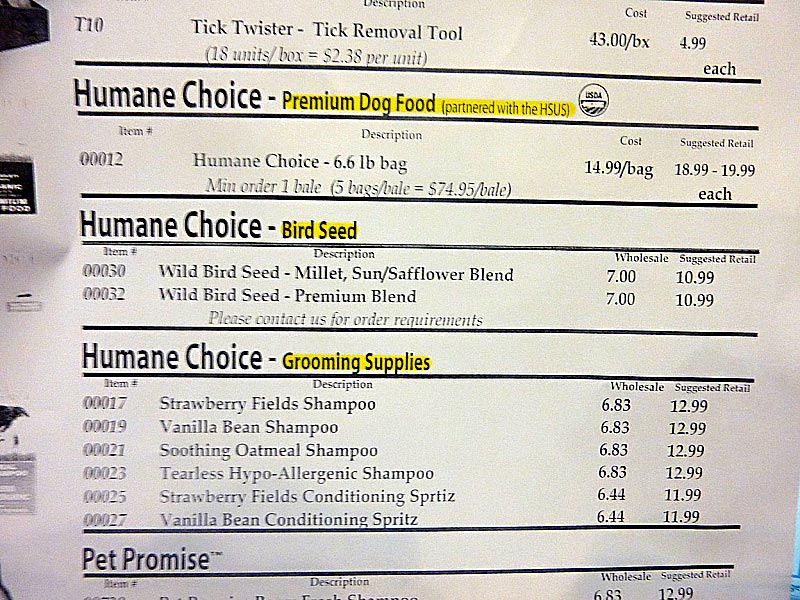 So the picture that emerges is a little different from what we thought it was. HSUS isn't the owner of a line of dog food. It's the distributor of Humane Choice dog food (G and B Marketing) that appears to be steering the ship. HSUS's appears to be only allowing its name to be used for a commercial tie-in (in exchange for 6 percent of the take).

When you think about it, this is really not all that different from what HSUS does every year with telemarketers in New York. It's just a licensing agreement, and HSUS is making money off of the value of its "brand." Just like any other business might consider doing.

We note with some bewilderment that the words "vegan" and "vegetarian" don't appear anywhere on the Humane Choice sales sheet. ("Made With Fresh Vegetables" is about as close as the marketing language gets.) We wonder why. Could it be that G and B Marketing isn't all that interested in HSUS's political food philosophy? Are we seeing the result of some heavy focus-group work?

Today we talked with two very nice ladies who run a pet store in Missouri. When we asked them what they thought about a dog food that's "made with fresh vegetables," they both agreed that it's something they might stock. But then we asked, "What about a competely vegan dog food, with no meat or animal protein in it at all? It that something you would carry?" After 10 seconds of blank stares, they response was an unequivocal "no."

Language, it turns out, is powerful. That's probably why G and B is steering away from animal-rights movement vocabulary. It's also why HSUS describes itself as an "animal protection" group, instead of (more accurately) as PETA's richer cousin.