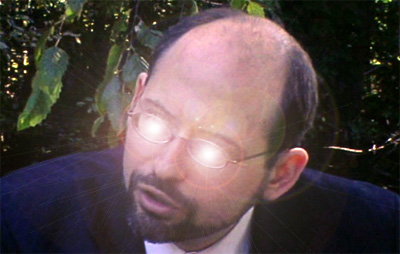 Remember Dr. Michael Greger? He’s the top M.D. at the Humane Society of the United States. (Why is it that HSUS's leadership includes a medical doctor, but no veterinarians? Just a random observation.)

When he's not busy trashing his debating opponents and prosyletizing alongside his favorite Taiwanese cult leader, Greger hits the lecture circuit. And he memorializes his lectures in a series of Humane Society of the United States-branded DVDs that HSUS markets (mostly) to like-minded vegans.

The latest offering in that series is called “Latest in Clinical Nutrition volume 4.” It’s a three-hour presentation that covers a hodgepodge of new health research from the past year. And boy, is it full of gems.

Did you ever want to know about zinc gel for colds? Greasy orange rectal leakage? Diet and marijuana receptors? Greger’s got the latest two-minute blurb.

Of course, some of these are strange topics for HSUS to slap its logo on—since when does an animal rights group care about vinegar?—until you realize that it’s basically a façade for Greger to slip meat-bashing and tofu-loving into a 2-DVD boxed set.

One of the more transparent parts comes halfway through during a topic called “mad fish disease.” I'm not making that up. Greger says that farmed fish might be susceptible to mad cow disease, citing one study from Greek researchers last year.

The scientists fed infected cow tissue to fish to see what would happen. And none of the fish “showed symptoms of clinical disease.”

There’s no evidence that anyone—outside of an experiment, that is—is feeding bovine central nervous system tissue to fish. Even the study's authors admit that the whole proposition rests on a possible that 's (in their words) “remote.” If they really wanted to see what's going on, of course, they could have fed the fish back to mammals (like cows or sheep) to see if any disease could be transmitted by eating fish. But they didn't do that.

So the whole experiment is inconclusive. But to Greger, it’s apparently worth whipping up a scare about something remote, as long as it promotes strict veganism.

(Do you suppose HSUS’s donors have the slightest clue that this is what their money is supporting?)

If you’re a regular reader, you probably suspect that this isn’t the first time Greger or HSUS has gotten into the mad cow debate. And you'd be right.

In May 2008, Greger gave an interview to South Korea's Munhwa Broadcasting Company (MBC) about mad cow disease. As HSUS's now-infamous Hallmark-Westland meatpacking video footage rolled, Greger said—at least according to MBC's overdubbed translation—that what we were seeing was an American "mad cow" entering the U.S. beef supply. That wasn't true of course, and it turned out that MBC mistranslated Greger. (What he actually said is unintelligible on the broadcast, and YouTube has long-since deleted it, so I can't show it to you.)

But the damage was done. In the space of just a few days a full-blown beef panic enveloped Korea. Literally billions of dollars of U.S. trade was lost. And whether it was intention or not, Michael Greger's comments caused the whole thing. A court in Seoul later forced MBC to air "two corrections and one refutation."

The year before that, in May 2007, the Center for Consumer Freedom blew the lid off of some similar HSUS scaremongering. Only this time, it was "mad pigs"—an idea every bit as bogus as Greger's fishy theory. And it was Wayne Pacelle himself spinning the vegan yarn.

Pacelle testified during a Congressional animal-welfare hearing that “scientific studies have pointed to the possibility that pigs, whose diet can include ground-up cattle remains, may harbor a porcine [pig-related] form of mad cow disease.”

Pork producers took offense, and wondered aloud if Pacelle was misleading Congress (or just relying on junk science). In response, Pacelle took to his blog to excoriate his opponents, accusing them of being unscientific. “British government researchers,” Pacelle wrote, “proved that pigs are indeed susceptible to infection with [mad cow disease] in research published in 1990 in The Veterinary Record, the official scientific journal of the British Veterinary Association.”

Turns out Pacelle needed to catch up on a little reading himself.

In short order a mailing list hosted at the USDA was abuzz with talk about Pacelle's misleading citation. Here's what one chicken industry insider wrote:

A minute's research on Google Scholar will reveal a published study by Wells, et al. — the very researcher cited by Pacelle — concluding that BSE [mad cow disease] is not transmitted to pigs, either. This study, "Studies of the transmissibility of the agent of bovine spongiform encephalopathy to pigs," was published in the Journal of General Virology in 2003. 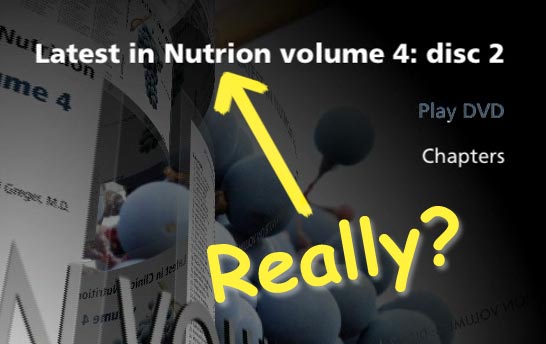 We think the technical term for this kind of research omission is “fail.”

The same authors, by the way, wrote a chapter in a 2006 book titled Prions in Humans and Animals in which they stated: “There are no reports of a naturally occurring … prion disease in pigs." They added that they found "no evidence of transmission after feeding pigs large amounts of infected brain material.”

In other words, an animal-rights leader fudged his science research and got busted.

This is nothing new. Hyperbole-prone animal rights groups have always used human health scares to push their agendas. When mad cow disease was constantly in the news seven years ago, PETA actually erected a billboard with a gun-toting chicken and the words “If the beef doesn’t kill you, I will.”

Yes, weknow. We remember shaking our heads in disbelief too. But the notion of "mad fish"—and many other ideas on Michael Greger's "Clinical Nutrition" DVDs—belong firmly in the science fiction category.